Creative Resins have revolutionised the marine industry with their AGlaze range of sealants and cleaners. Offering full guarantees on all of their product range, Creative Resins have enabled sailors to start enjoying their boats rather than spend endless hours cleaning and polishing.

AGlaze is fast, easy and foolproof to use and is water cured. It bonds to the paint surface creating a protective-coating. (Flexible enough to withstand 9” in flight expansion and contraction of Concorde). 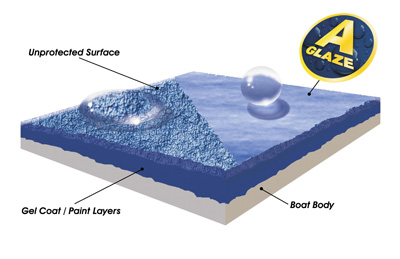 Many boat owners suffer from swirl marks due to fender rubbing as well as continuos polishing. Here you will see recent pictures taken before and after the AGlaze treatment has been applied.

As you can see by this photo the boat has suffered from fender marks as well as polishing marks. 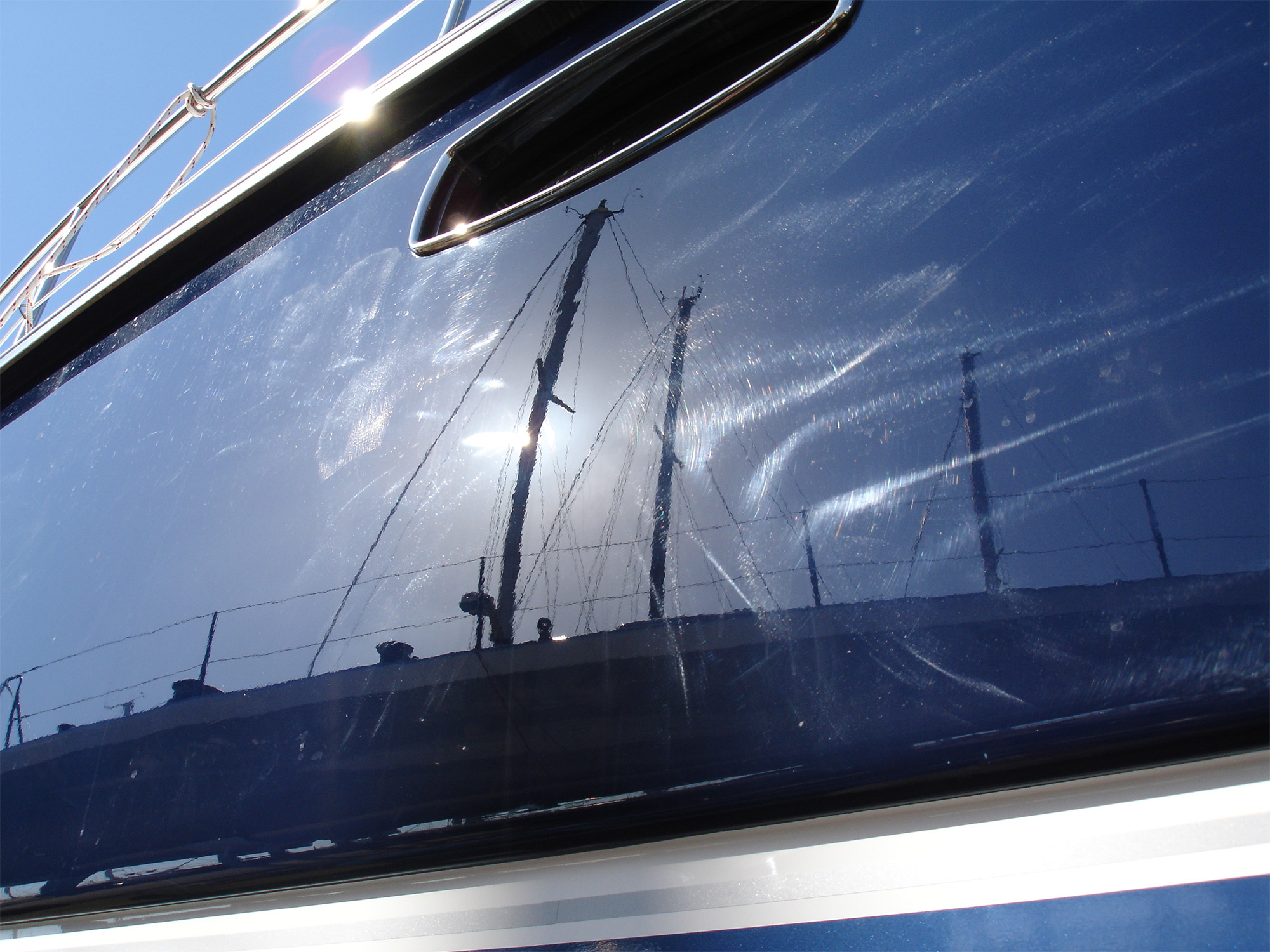 As you can see by this photo after the AGlaze treatment has been applied the marks have been removed and a gloss reinstated to last a minumum 12 months with less maintenence than usual. Just a hose down after each journey where possible and a wash using our Wash and Shine Shampoo when washing the boat. See customer comments on Targa 50 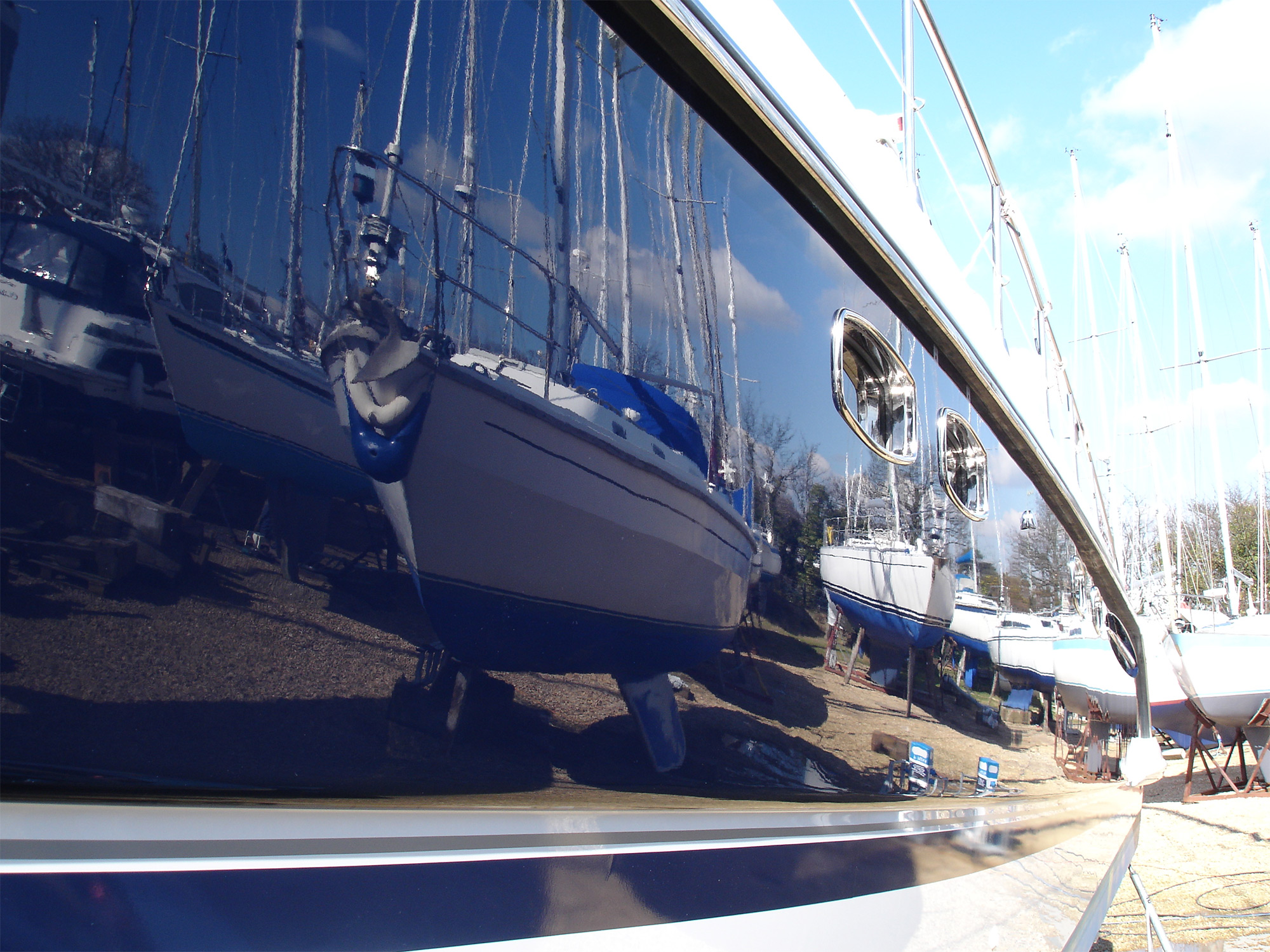 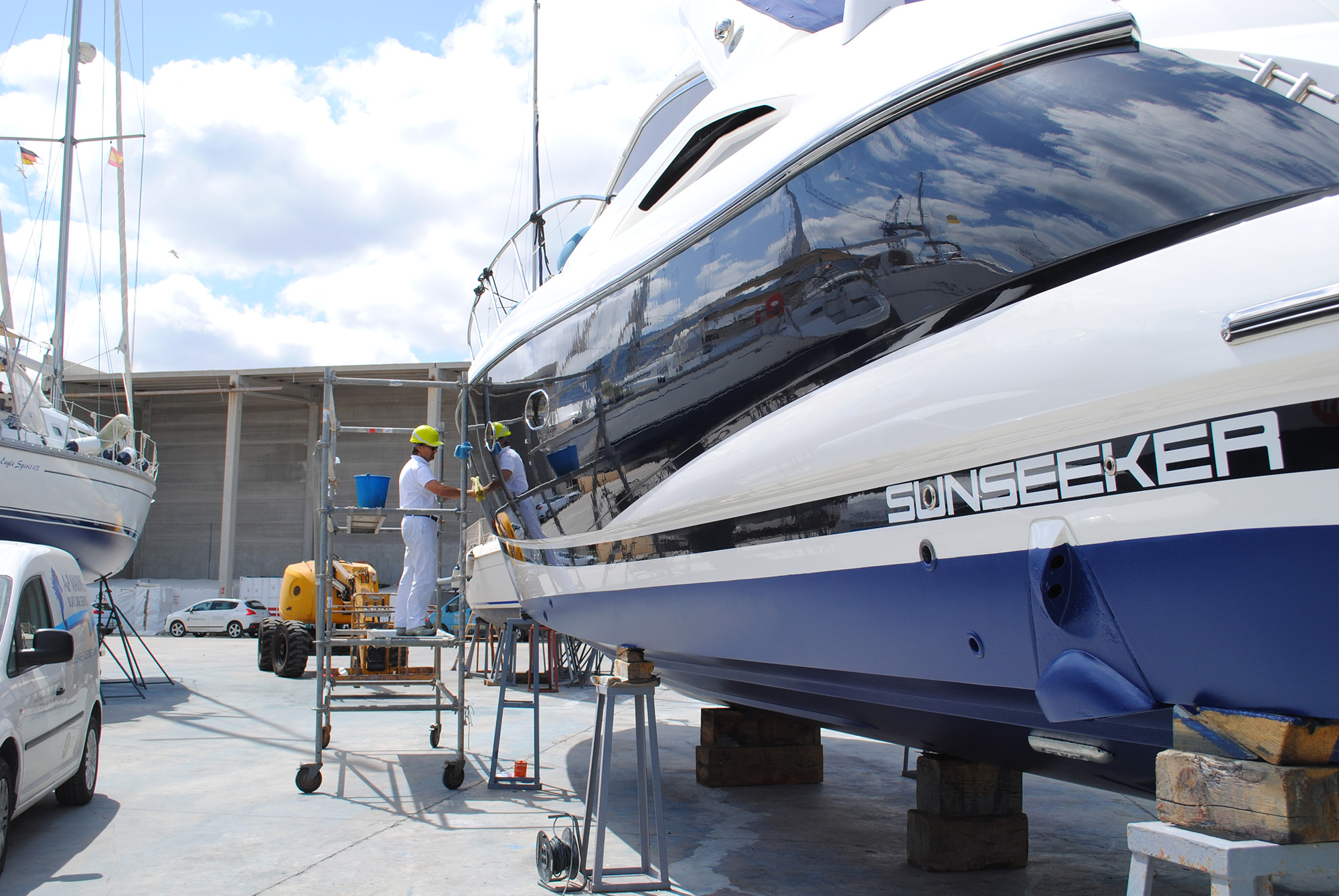 AGlaze Marine Sealant has proved immensely successful in reducing the labour tasks of continual polishing and problems relating to ‘black streaking’. Although the product will not stop these marks from appearing they will certainly not stain the surface and will be easily removed.

This is most definitely the product that all marine enthusiasts have been waiting for to enable them to enjoy more leisure time cruising and sailing rather than washing and waxing.

Offering products for all over valeting from the GRP gelcoat to vinyl or leather seating, carpets, windscreens and fabric coverings the AGlaze Marine range is now being sold worldwide through Creative Resins appointed agents, chandleries, mail order, charter companies, boat manufacturers or the individual boat owner.

With the rising cost of fuel worldwide, more and more boaters are looking to keep their craft pristine. With the AGlaze range of products, we can ensure even tired looking vessels return to the shiny boat they once were. 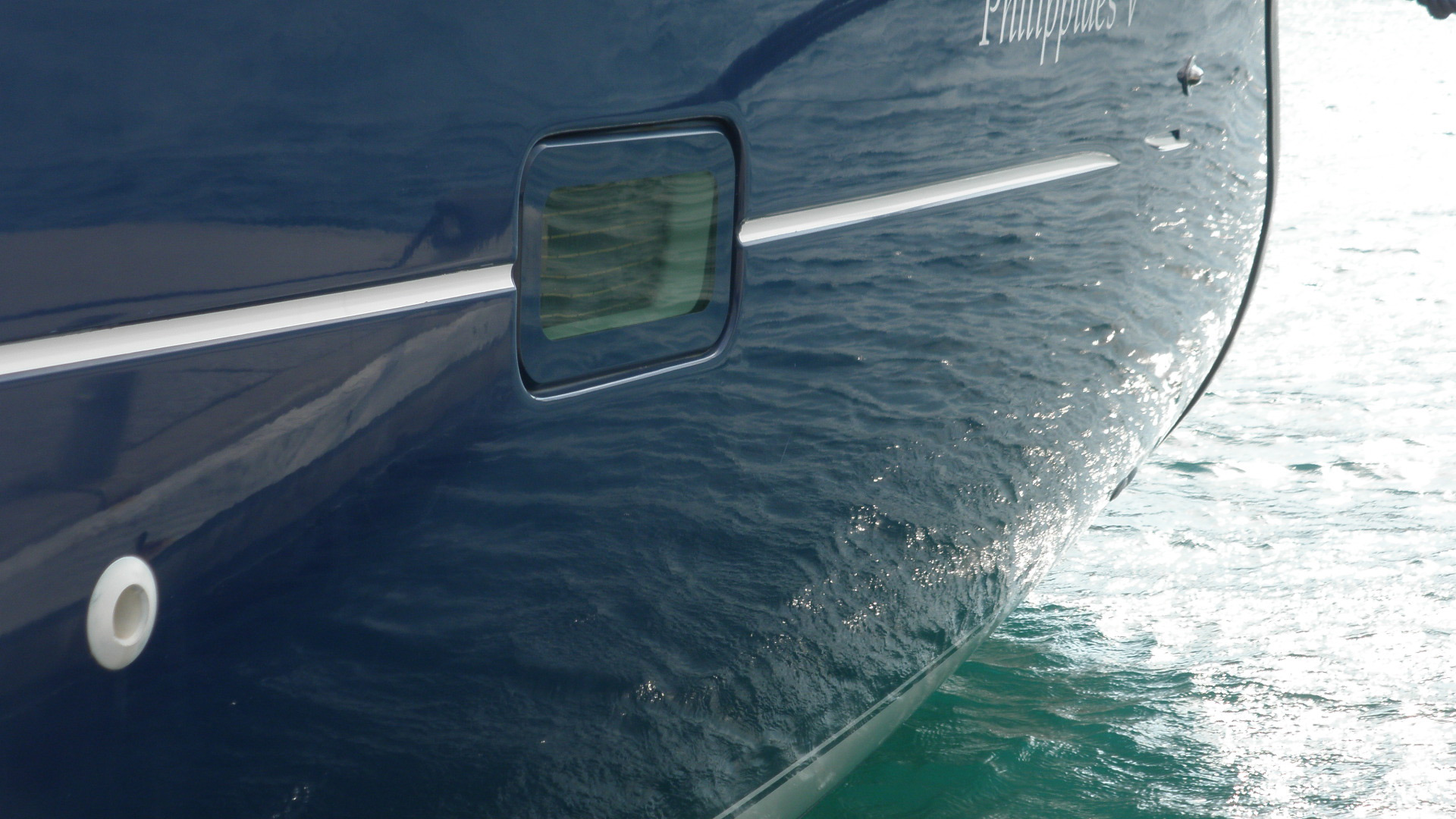 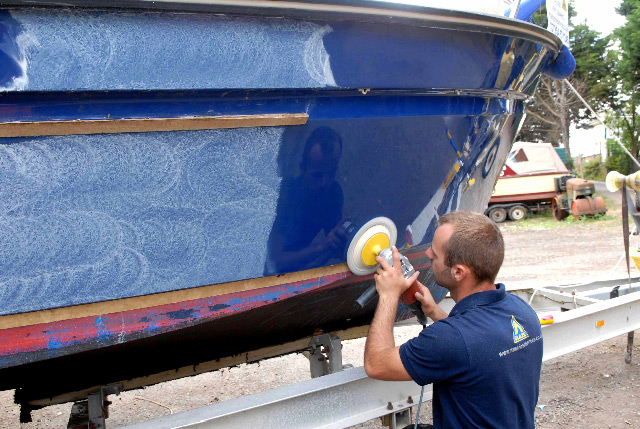 Unfortunately some boat owners think a quick wax or polish will bring their boats shine back and to some extent they are correct however the majority of waxes offer the GRP or painted surface of a boat no protection from UV rays which work away at the surface causing it to colour fade or crack. Over the years, the boats surface will become unmanageable and no amount of polishing or waxing will help to bring back the shine as the GRP is effectively dead or the painted surface needs a respray.

When most waxes are applied to a car’s bonnet, the engine will heat up and basically melt the wax so within hours, any protection you think you have applied has disappeared. Cars are often stored in a garage or under shade, most boats are not or are simply too big to store so imagine what damage the sun is doing to your boat. Many are out in the harsh elements 24/7.

Marine AGlaze can be applied to all types of marine craft ranging from dinghies, jet skis, motor boats, yachts and cruisers to international cruise boats, ferries, super yachts, naval craft or lifeboats with GRP or painted surfaces. It can be applied to any size boat ranging from a small speedboat to a 100m superyacht – no area is too big or too small.

Marine AGlaze is available as a professional application in most areas of the world or as a DIY application. 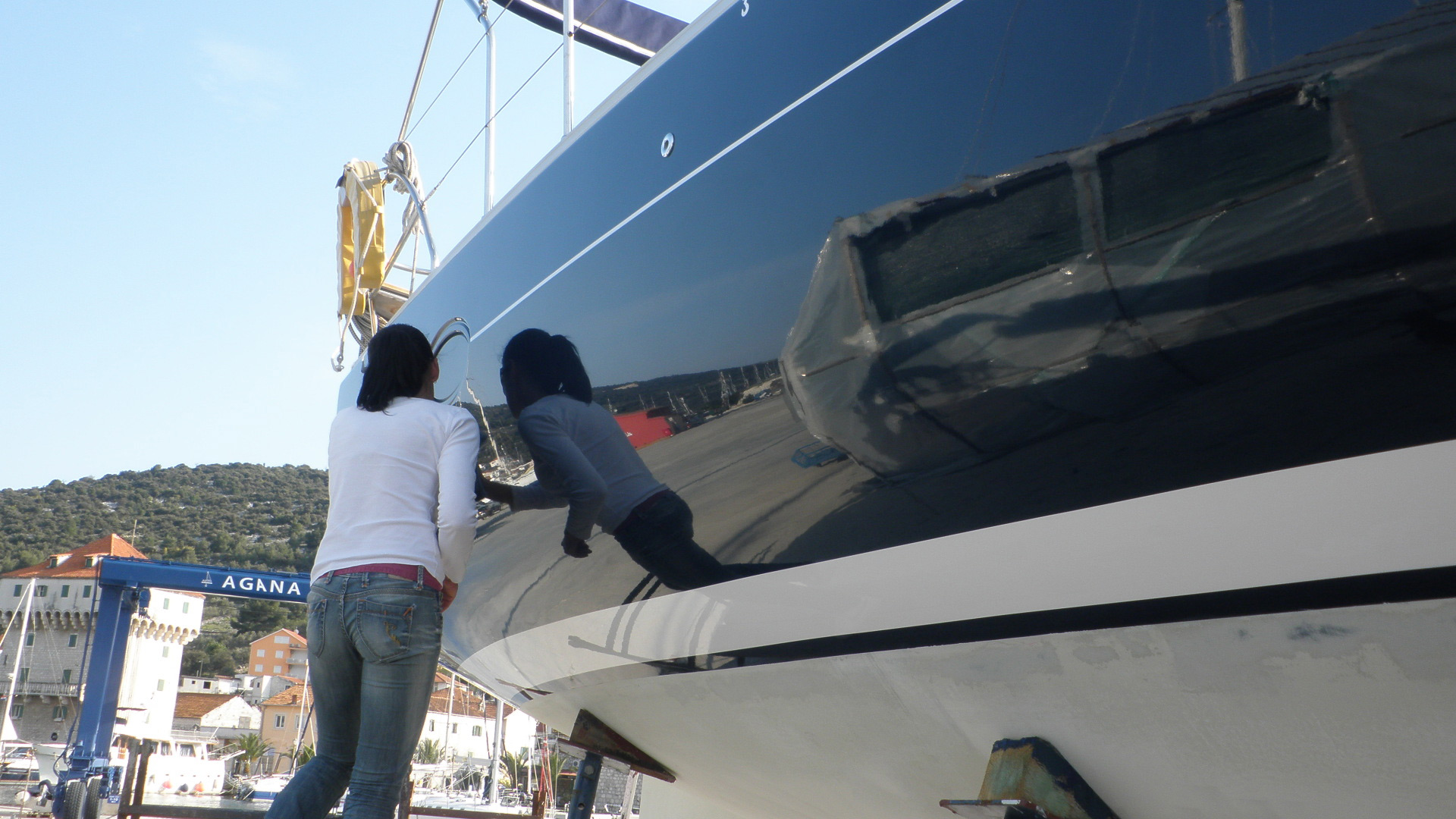 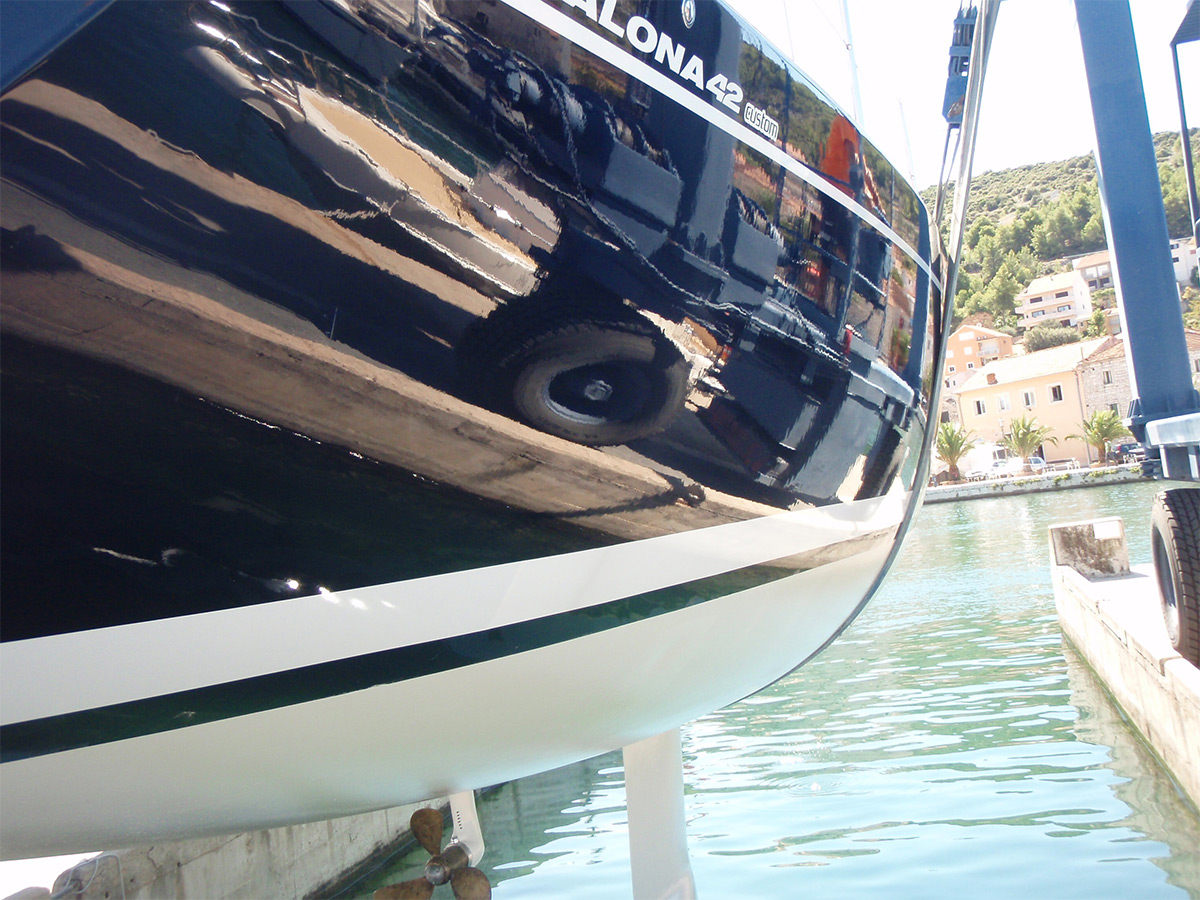 Already tried and tested in the aviation, rail and motor industries, AGlaze products have a first class reputation worldwide putting shame to inferior cleaners and polishes. AGlaze Surface Sealant is already used by British Airways, Singapore Airlines, Qantas and Virgin (applied by Qantas in Australia) as well as many car dealerships worldwide including dealerships of Bentley, Landrover, BMW to name a few.

In 2007, we introduced AGlaze Surface Sealant which when applied to your vessel can help keep it clean even when you are not using it. When it rains or you wash the boat, the polymer resins in our Active Formula hold onto the water causing it to bead and then roll down the boat taking any surface dirt and grime in its path with it. Whilst this is not a self cleaning product, it certainly makes the maintainence of your vessel easier.

In 2010 we introduced a new Glaze formulation for areas most vulnerable to the elements with examples being coach roof and rear quarter panel areas. MP Glaze will provide added protection for these areas and can be used with the Paint/GRP Glaze.

To apply the AGlaze, first of all you will need to wash your vessel with our wash N shine shampoo. Wash N Shine is a unique product that is specifically formulated to ‘float off’ dirt and grime while leaving a sparkling just waxed finish. This is a wash and polish in one.

Once the boat has been washed, AGlaze surface preparation needs to be applied. This is a non silicon based fine duty polishing compound and cleaner, ideal for preparation on paintwork before final waxing. It ensures that all dirt is removed and is easily applied by hand or buffer.

Finally AGlaze Marine Sealant is applied, very sparingly as it goes a long way. AGlaze sealant bites into the surface of the GRP or paint finish to a depth of 5/7 microns and creates a surface shield. This prevents practically any form of pollutant from penetrating the sealed surface, thus giving the base material total protection from acid rain, snow, salt, industrial fallout, oxidisation and colour fading but most of all the sun’s ultra violet rays. Two coats of glaze need to be applied. The AGlaze system is not a polish or a wax but actually bonds to the surface and creates a brilliant, high gloss protective barrier leaving dirt and pollutants resting on the glazed surface. A quick wash will maintain the treated surface leaving it looking pristine.

A Marine Kit up to 30ft consists of:

The Advantages of Marine AGlaze Sealants are:

For extra lengths please call 44 1795 592640 and speak to our AGlaze advisors for quantities required as it is important that the correct amount of product is applied to uphold your warranty and protect your vessel.

All products manufactured in Great Britain

We use cookies to ensure that we give you the best experience on our website. If you continue to use this site we will assume that you are happy with it.Ok